Heya, just wanted to promote this frenzy going on right now. It doesn't have a lot of traction so far, so check it out! 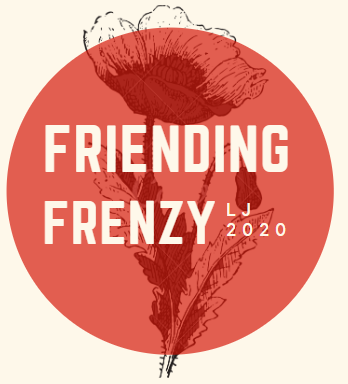 LJ 2020 Friending Frenzy!
For long time LJers or those who would like to return, but their friends lists have been deserted!

I don't fill these out often anymore.

1. Did you marry your high school sweetheart?

I didn't have a high school sweetheart. I had no interest in dating anyone at my school. Also I think some people assumed I was a lesbian and I was too boyish for most guys to take any interest in me. I was talking to Justin during my Senior year of HS, but we were not dating yet. We started dating my first year of college.

I started driving the summer after HS.

Also started first job summer after HS. I worked for the County Fair for two consecutive summers. First summer I picked up trash, second summer I cleaned toilets. It was ok. Dad thought it was hilarious how upset I got after my first check when I first realized how much money the gvt takes from you in taxes XD.

Hell no. I was a nerd and made friends with other outcasts. I also had some issues with Aspergers so I was made fun of until about 10th grade, then wasn't after that.

Yes, I was in the jazz band and the concert band. Great memories. I played clarinet, then switched to alto and bari sax. This was probably the best part of HS. Last year, I found out my HS band director died. He wasn't very old and it was very saddening. Without him, I think HS would have honestly sucked.

No, I was a good girl. My parents would have killed me.

I think so. Just because I think my experience would be a lot better had I not suffered from depression. I was horribly depressed for long periods of time from 10th - 12th grade. I managed to avoid it in 9th grade, but my senior year was terrible because I was in such a deep depression for most of the year. It didn't have to do with anything, I'm pretty sure it was just bipolar, but after HS I have never been depressed like that.

9. Still talk to the person that you went to prom with?

Hell no. One time our band director made us play for a game and it was a negative experience so we never did it again lol.

13. Do you still have your yearbook?

Got one for 9th grade and 12th grade. I think it still exists somewhere, though my parents love to throw out my stuff, so wouldn't be surprised if they've gotten rid of them.

Not sure what this means? We had no career paths in HS. It was just a standard program.

15. Do you still have your senior ring?

My band teacher Mr. Simpson and my astronomy teacher Mr. Kruger. Myself and some friends were in Astronomy club for all 4 years. It was a lot of fun. Mr. Kruger still teachers there and has this giant science complex he developed including a planetarium.

Same exact style as it is now. Nerdy teeshirts and jeans. I was all about Hot Topic shirts during HS not for the goth stuff, but for all the video game tee shirts. Unfortunately I can't dress like that at work, but I would dress like that every day if I could.

I think it was these pair of airwalks I loved. I remember one time we went to Reno for a jazz band event and I didn't bring the proper band shoes and instead wore those airwalks. Mr. Simpson was aghast and he literally had me go on stage in my socks! It was really funny. He said that those ratty airwalks would have affected our score XD.

Packed lunch every day. Nothing special. Usually a sandwich and an orange.

Styx probably? I was just starting to get into 80s music during this time and I remember being a big fan of Styx. Some anime music lol.

Much better than it is now only because I had not yet developed that horrible habit I have now to chew on my hair : (. So it was long and straight and blonde. I wish I could have that hair again, but it darkened and I can literally only keep it in one (ugly) style right now because I chew on it so much.

22. How old when you graduated?

I've decided to change my lj name after 18 years. I had to pay 15 dollars for it so I hope I don't regret it because the last time I paid for anything on lj was a paid account at least 10 years ago (Justin gifted that to me for that about 5 years in a row for Valentine's Day until I told him I didn't want a paid account anymore).

I wanted to keep "majestic" in there because honestly sometimes when friends make name changes, if I don't interact with them a whole lot, I have a hard time keeping track of who is who so I didn't want that to happen to the friends who don't interact with me much.

"majesticarky" stood for "Majestic Arcanine"("majesticarcanine" was too many characters on lj) which was my first internet name. Arcanine has always been my favorite pokemon, and for some reason, I thought that the first generation pokedex entry called it a "majestic" pokemon. Actually the adjective used to describe Arcanine in that generation's pokedex was "legendary" but the damage had already been done with my yahoo e-mail being called "the_magestic_arcanine"(and yes, I didn't know how to spell the word at the time (~1999) and never changed it).

In subsequent years, I've usually tried to use "Zaichik" as a screen name for a few things. "Zaichik" is my very favorite word in Russian. Not only does it start with the BEST letter in the (English) alphabet, but it means "bunny". Ok, technically it means "little hare"("hare" itself is "zayats" but you almost never hear this word), but it's a diminutive word that is basically translated to "bunny".

I think y'all should actually share what your username means because I'm willing to bet most of your friends have no idea what it means and some, like me, are probably curious : ).

For anyone who didn't get a postcard last time, would you like one this time? Sorry, the animal ones seems to be popular and have all been claimed ( I didn't get very many...), but I have a bunch of scenery ones. 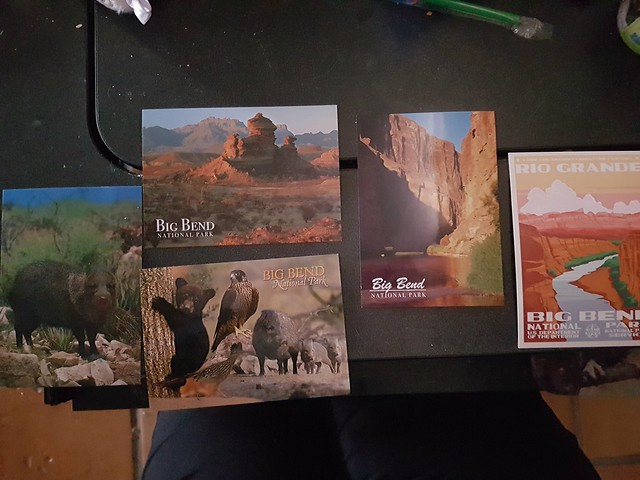 I bought some post cards in Terlingua and I would just love to send them to you guys!

EDIT: I'm sorry, it seems like I didn't get enough postcards, so I've run out. Next time I'll send more!

Here is the postcards under the cut:

P.S. IF YOU WANT A SURPRISE, DON'T CLICK ON THE CUT . You can just tell me you want to be surprised.

Don't worry if you live overseas, I will ship overseas, even through to the Russian pigeon post which may or may not take 3 months to receive your postcard.

No one has ever whistled at Vector before and she doesn't quite know what to make of it...

Need to try the same thing with Hissy and see what she does. May hiss at me lol.

19. Song you think is overplayed/overhyped

Bon Jovi- Livin' on a Prayer. This song was voted as VH1's #1 song of the 80s. I remember watching the countdown something like 14 years ago now. It's played a whole lot, and it's fun song. Justin really hates Bon Jovi, I don't even really understand the reason. I think it's that "Cowboy" song that he especially hates. But I dunno 80s hair bands aren't everyone's thing. I think maybe "Bohemian Rhapsody" would have been a good choice here. I actually like Livin' on a Prayer more than Bohemian Rhapsody, I know, travesty.

I'm actually looking forward to this week because again Supervisor will be out for all of it except for today. Already she's irritated me with something today because first thing she was asking if she could put this collection she's getting underneath the other set of processing tables across from me. There is really no where else for it to go. Everything has to sit on the floor somewhere because she's gathered so much crap that there is 0 shelf space for it and I constantly have to be moving boxes to get to other boxes and folders. She actually was supposed to view this collection in Austin and pick the stuff that was to come here, but no plans changed and it's all coming here. It has something to do with this Texas Park Ranger's materials. I feel like 90 percent of it will be garbage that should go into the dumpster, but any time anything makes its way in here, it NEVER leaves. It's going to go sit on the floor right next to these cut up newspapers from around 2014. They are duplicates of ones we have in our collections. I keep telling myself that soon it won't be my problem and I will never have to deal with it again, but it's like I haven't had a job offer yet.

A lot of this weekend was dedicated to cleaning and I will admit that Justin did a lot more of it than me, but it's because he had to clean his room and he had a LOT to clean in there. New rental manager is coming over today to do an inspection/walk through. He complained that I did nothing, and maybe it felt like nothing compared to him, but I don't keep my room as a trash pile, so whatever. We argued again this morning because again he took forever walking out the door and made us late yet again. I am so tired of him doing this. I need to actually enact my threat of leaving him to walk to work.

Diet is ok. I don't think I did great last week so I didn't really lose weight. No gain though, so that's nice. I'm afraid it will be the same this week because of my trip, so I'm going to try extra hard not to break my diet today- Thurs.

Just continuing onwards. I would love it if some of you would participate, but if you don't want to, you can always share my meme : )

It's been a while since I did a music meme, so I decided to create my own. I made it a little different in that instead of posting daily or one song at a time, it is encouraging you to post three for the various categories I've created. Of course, you are welcome to post as many as you want and can do it in the traditional one per day if you like. I made this all up myself, but some of these questions are probably the same as ones in the past. Here it is in its entirety:

10. Song with your favorite lyric.
11. Song you judge to have the best lyrics.
12. Song with the worst lyric/s

They died too young

22. Song from band you believe is underplayed/underappreciated
23. Song you may have heard on the airwaves a couple times, but think it should be played more
24. Song you can't believe is never played.

25. Song you knew from first listen would be a hit.
26. Song you are not surprised became a meme.
27. Song from an album of a band that you believe needs to venture out (into new styles or genres) more.

28. Song that friends would be surprised you are into.
29. Song you do not believe belong to a particular band.
30. Song that became an unprecedented hit.